The 40-minute drive—or ride—to work in scorching heat and heavy traffic is a common morning routine for most of us. When this first challenge is successfully met, you have to fight for parking space, and then make it to the elevator on time.

If Lady Luck is kind, you won’t have to take the flight of stair to your 9th floor office. With the amount of energy and patience left in your body, you have to reach your desk to customary mark your existence in the office.

After setting a new time record every day, your colleagues’ request for coffee leaves you questioning their sanity. Why would anyone drink a hot steamy cup of coffee in this hot weather? You’d rather have lemonade on ice to cool of the heat.

Well, if you think that hot beverages make you hotter, you are wrong. You can beat the heat with some more heat. How? Let’s learn more about this phenomenon.

What Does The Science Say?

A research was conducted with a sample of 9 men. 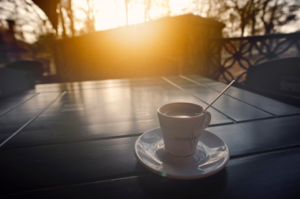 The men were asked to cycle for 75 minutes, while being exposed to a running fan. The wind evaporated sweat as soon as it started forming, when the exercise was over, the men were given water of different temperature.

In simple terminology, cold drinks can make you cool from the inside, without actually making you cooler. How does this happen? The cold fluid that you drink inhibits the sweating mechanism of your body, making you feel cold.

So, all the mystery lies in sweating. You lose 2.43 kilojoules of energy when your sweat evaporates from your skin. In the above-mentioned study, the men who drank hot water gained 52 kilojoules of heat from fluid intake. This was later released from their body in form of sweat, which caused them to lose 108 kJ (kilojoules) in form of sweat.

On the other hand, men who consumed cold water prevented their bodies from heat release in form of sweat evaporation. The men cooled down at 138 kJ, which was not sufficient to counter react the 159 kJ of heat retained in their body. So they ended up gaining more heat.

In simple words, hot drinks make you sweat more, which causes you to lose more heat. So, should you be drinking custom roasted coffee throughout the scorching heat of July.

Obviously NOT! The heat receptors in your body, like the stomach, neck and brain needs to be kept in mind. In addition to this, sweat evaporation also plays an important role in maintaining your body temperature. Hence strike a healthy moderation between hot and cold.

To give your sweat glands a good workout, keep your coffee jars full with freshly roasted beans from Custom Roasts by Alex. We deliver quality coffee on your door-step within 24 hours. Call or order online to get quality caffeine.